It becomes you, “Some of the best cowboys are cowgirls”

“Keep your eyes on the road,” talking, excited, in the moment, we hurried as we drove to make the rodeo.  I wasn’t expecting ‘it’ that day, like most things in life ‘it’ shows up when you least expect it. This was one of those moments in time that gets branded permanently into your memory and on your heart.

This defining moment happened some years back while sitting in the stands at an evening performance of a PRCA rodeo in Casper WY. I was waiting to watch my daughter Tiffany run barrels in the short round on Dreamer. Her first run was a good one and we had made the trip back and forth from the National High School Rodeo Finals in Gillette, WY where she had also qualified for the short round. This had been an amazing week.

I made my way to find a spot to sit at the end of the grandstands overlooking the contestants as they warmed up.  As an observer of people and trends this was a perfect opportunity and I began observing this “event” of core customers as my laboratory. Many WNFR competitors were there in attendance and an enthusiastic diverse crowd provided me a wide variety of observations.

A woman caught my eye. She was walking in front of the crowd, nicely dressed in black jeans, no belt, a cowboy hat, turquoise shirt. She was walking with an intermittent limp and steadied herself occasionally along the arena fence, something about her was familiar but I could not put my finger on it. I wondered who she was.

My attention went to the arena as they were finishing up the saddle bronc riding and had cleared the arena for intermission. Trick riders, 3 of them performed. Then I spotted her, Lori of Ram Rodeo. I had no idea she had this talent. This professional woman had been trick riding her whole life. She told me that trick riding was her release. It was awesome.She is in shape, an athlete, and having fun! I could not help myself and I stood up giving them a standing ovation, I was so impressed. I asked Lori if she had a picture of her trick riding and she sent me this image along with the rest of “the story.” 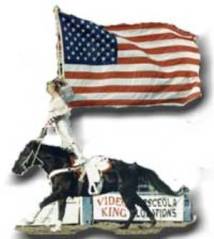 "Some of the best Cowboys are Cowgirls"

“This photo is from Okeechobee FL the last year it was held in the old arena. This was a huge outdoor pen where it took over 30 seconds to make a lap. I rode with John Harrison that year, I think it was 2002.

The horse is “Junior” aka Parker JR, he is a 1984 model. Mike and I got him when he was 6.  I didn’t start trick riding on him until he was 17. He was always my back up horse as well as Mike’s team roping horse until I lost my regular “Joker”. He was so fast and it took a lot to get my head in the game and not be scared.  He turned out to be fabulous – one of my top two horses in my lifetime.  I wish I had a whole herd of horses just like him.

Dally (Lori and Mike’s daughter) has been riding him since she was born and by herself since she was 3. She currently rides him in barrel racing and poles and is learning to trick ride at age 6 on him.” Lori Orman

Much to my delight the evening was not finished with surprises. I went on to watch my daughter compete in short round of barrel race, she made a great run but tipped a barrel to place. And the lady I had observed earlier in the evening walking along the fence had just entering the arena. Turns out (Ruth), a WNFR qualifier and was making a run that had the crowd behind her, she was a cowgirl, a legend in her own right.

That was “it,” once again I had to stand up and cheer, these three women were everyday heroes. On that day I had observed three great cowgirls who had my attention from the start, each from different generations, each at different times in the lives shooting for the stars while keeping their eyes on the road of their dreams, and each an inspiration to me.

That day I witnessed character, talent, spirit, courage, cowgirl. I knew it to be true, there was no doubt in my mind “some of the best cowboys are cowgirls!”